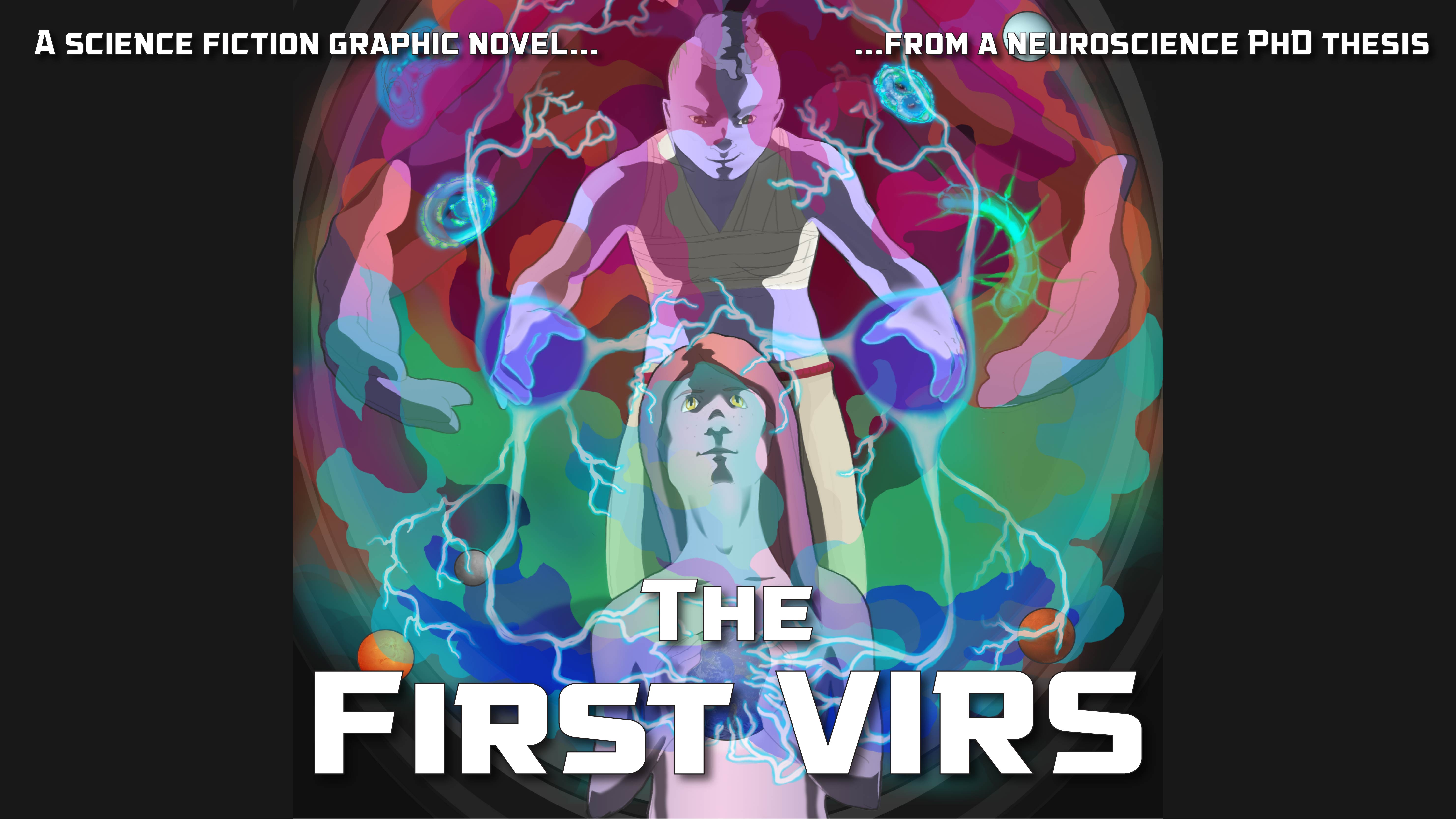 “In 2067, the Global Water Crisis wiped out much of humanity, forcing survivors to flee underground or escape into orbit. 50 years later, teenager Asoka Morei lives in sheltered privilege at a Green Haven, far from the dark and over-crowded Underground Cities. But when Asoka’s Haven is attacked, they must journey into the Red Zone to find a mysterious people who may be re-growing the decimated Amazon Rainforest.”

My research combines studies of cuttlefish, the philosophy of science, Perceptual Control Theory, and the evolution of “the brain” throughout time and in many species. In collaboration with NeuroGears, I build interactive art installations that both allow people to participate in field neuroscience experiments, and communicate science in fun and interesting ways. You can learn more at www.EveryMind.Online.
I spend a lot of time thinking about permaculture, anarchy, circus, and education. I love being in the wilderness, especially in the mountains and by the sea. I got hooked on the neuroscience of storytelling while co-writing and choreographing an original musical called Hack, Punt, Tool. My dream future is to train and play as a musician, capoeirista, and VIRS (vigilante intergalactic roustabout scholar).

Dominique Duong is an illustrator and comic artist working in London, UK. She graduated with First Class Honours in Illustration & Visual Communication from the University of Westminster.
Her work has been published by Imagine FX, The Covent Gardener, Bone & Ink Press, Trawler, AppBox Media and Lise London, among others.
Since her illustration career began, she’s worked on editorial and book illustration, theatre set designs, concept art, story-boarding and comics.
She’s fascinated by the macabre, surreal and magical, with mythology, fairy tales, nature and folklore all being huge influences, but it’s storytelling that forms the heart of her work.

Matteo Farinella received a PhD in neuroscience from University College London in 2013. Since then he has been combining his scientific expertise with a life-long passion for drawing, producing educational comics, illustrations and animations. He is the author of Neurocomic (Nobrow 2013) published with the support of the Wellcome Trust, The Senses (Nobrow 2017) and other science comics. He has worked with universities and educational institutions around the world to make science more clear and accessible.

Early on, Gideon Gerlt’s creativity was strongly influenced by the vibrant natural environment of rural Alaska. Exploring the wilderness in the shadow of Denali mountain with so little human contact, instilled in him a curiosity about the unseen world that existed in such great abundance and yet felt elusive. This sense of mystery has worked alongside a pursuit to explore individual and societal concepts of self and other, covering a broad range of topics from interpersonal relationships, to concepts of consciousness and artificial intelligence, and an exploration of the microbial world.

Gideon’s recent works explore the intersection between art, science, and technology. Splicing geometric shapes and architectural design with structures found in nature, these works reflect on correlations between micro and macroscopic worlds. Inspired by a fascination with biological systems and processes Gideon has created site-specific, interactive, multimedia installations that have emulated organic complexity through iterative patterns. These works have suggestively represented bacteria, protozoa, neurons, mirror cells, and DNA.

Solei is a visual artist, muralist and musician living in Boston, MA. Her work on the “Dreams” chapters of The First VIRS is her first foray into graphic novel illustration. When she’s not painting on walls or writing music, Solei runs an arts nonprofit in Boston called Brain Arts Organization, and is the Gallery Director at a community art gallery called the Dorchester Art Project. More of her work can be seen at https://www.soleiarts.com/.

Graham Marema is an American digital artist from the blue mountains of East Tennessee. She currently lives in the taller, browner mountains of Colorado, working on digital campaigns for Environment America, specifically focused on work around clean, renewable energy.

Miguel Soler Montellano, was born in Granada, Spain in 1983. He studied fine arts in Granada, Munich (Germany) and Salvador de Bahia (Brasil). He lives and works in Berlin since 2011, where apart from painting and drawing, he develops a experimental music project called Automatenfall. He writes about himself in third person.

An Aerospace engineer by profession, and an artist at heart, I am a Space geek who loves challenging projects that mix Art and Science. Currently pursuing a PhD in Satellite Navigation Technology, I also dedicate a part of my waking hours to artistic endeavours and commissions so that it doesn’t just remain a hobby, overshadowed by math equations (which are also aesthetic in a way).

Monica Keszler is a recent chemical engineering graduate from Northeastern University and a freelance educational comic artist. She contributes quarterly pedagogical comics to the journal of Chemical Engineering Education and has spent several years collaborating and developing educational comics with students and faculty at Northeastern University. She has also written and illustrated her own children’s book, Kira Kiwi, How Will School Be?, focusing on the importance of diversity and acceptance. She works full-time in materials engineering research and development and hopes to one day join the pursuit of creating sustainable plastic alternatives.

Jesso is an illustrator, vr developer, and apprentice tattoo artist. Transplant from Illinois to New England, plant mom and bicycler. She loves storytelling in all mediums and making art of science.

Xiao Xiao is a multimedia artist and human computer interaction researcher. Her doctoral research from the Media Lab has been published at academic conferences around the world, including CHI, TEI, SIGGRAPH, and NIME. As multimedia artist, Xiao has presented at venues such as TEDxBoston and the Aspen Ideas Festival. New art works will be on exhibit at the Historic New Orleans Collection in 2019. Deeply curious about the art of learning across domains, Xiao was co-editor and illustrator for the book Inventive Minds: Marvin Minsky on Education, forthcoming with the MIT Press. In her spare time, Xiao practices yoga, paints, and teaches herself how to play the theremin.

Julia Zimmerman is an artist and student living in an old house in Vermont with her partner and two cats. She is happy to be involved with the First VIRS project because it explores how intellectual or creative work is the product of multiple people and organizations, and because it attempts to cross some of the silos we haven’t yet figured out how to avoid creating when we specialize. She is generally interested in thought as a resource that takes place outside the individual level, alongside language - across people, time, and organizations - and loves being involved with a project exploring that lens.

My educational background is in the field of the natural sciences and I received my PhD in Biology in 2015 from the Institut Pasteur Paris in France.
I now work as a freelance scientific illustrator and Adobe software coach for scientists. In parallel I am studying a Master’s in Knowledge Visualization at the Zurich University of the Arts.

Dr. Emma Cheng has received professional training in medicine and design. In medicine, she has clinical and industrial experiences in general medicine, rehabilitation, and cosmetic medicine. In design, she has worked on various projects in visual design and UX design. Her artwork has been included in the 2016 Asia illustration collection. She is also one of the winners in the 2015 Hiii illustration competition.
With her passion for medicine, design, and art, she founded EMA & D medical gifts shop, to make medical knowledge more accessible to people. Her aspiration is to combine her skills in medicine and design to make the world a better place. With that ambition, she attended a biomedical innovation program in Stanford university in 2017. She is currently a cosmetic medicine doctor and a medical illustrator.

Gil Costa is a Biologist, born in Sintra, Portugal. He started his professional path as a Designer for Science, for both public outreach and communication among scientific peers, after finishing his Neurosciences PhD. He has worked for scientists around the globe designing quality figures for publishing, covers for high impact scientific journals and multiple graphic material for press, events, reports and exhibitions. In his scientific research he studied the field of decision making and acquired skills in behavioural training, neuronal recording and data analysis. This scientific background helps him convey clarity, accuracy and salience to science communication, with a spark of creativity, just to add a bit of flavor.

Jennifer (Jenn) Deutscher grew up in Phoenix, Arizona, and spent much of her childhood exploring the American West. These travels exposed her to the wonders of the natural world, which is perhaps why she ignored all sound career advice in order to work as a freelance scientific illustrator. She believes all science can be made accessible, engaging, and visually compelling. Aside from her client work, Jenn also publishes a series of weekly illustrated science facts under her online handle, Alithographica. She holds a degree in biological sciences and illustration from New York University as well as a certificate in botanical art and illustration from the New York Botanical Garden, and now resides in Brooklyn with her ever-growing plant collection.

Melissa Jedrysiak is a scientific illustrator of Filipina and Polish descent. She was born and raised in Chicago, and she graduated from DePaul University with a B.S. in Biology. In her spare time, she can be found tending to her urban garden, playing soccer, or sipping a cup of delicious tea.

Sara is a biomedical illustrator and animator based out of Toronto. Illuminating the beauty in the world of science, as well as making the complex interesting rather than intimidating has been a fascination.

Vigilante Intergalactic Roustabout Scholars (VIRS) by Danbee Kim is licensed under a Creative Commons Attribution-NonCommercial-ShareAlike 4.0 International License.
Based on a work at http://www.danbeekim.org/projects/2018/02/28/VIRS-concept/.
Permissions beyond the scope of this license may be available at danbeekim.org.